What’s one of the best ways to help students with a writing task?  Do the writing yourself. In this post, writing teacher Paula Uriarte decides to take on the writing assignments she gives to her 12th grade students, choosing a topic and conducting research herself so that she can share her process, her drafts, and her experience with them.

Why Should They Do It if You Don’t?  The Power of Sharing Writing With Students

I was admittedly nervous as I turned onto a tree-lined street in an older Meridian neighborhood on a beautiful fall day.  I was about to meet Bill Cope, a writer for our local independent paper whose columns had always fascinated me. Just past the house I parked my car and saw that the garage door was open.  He was standing there, wearing a blue sweatshirt with an “I” and the word State behind it. I learned later that his daughter went to Iowa State. In sweatpants and Van-looking slip ons, he looked comfortable as he put out his cigarette and walked over to shake my hand.

What was I doing here talking to this stranger behind some of my favorite columns in the Boise Weekly?  Trying to be a better teacher.

Bill offered me a cup of coffee, and I learned that although his background was in music, he had been a substitute teacher for about three years pretty consistently in Meridian schools—enough time to know it wasn’t a job he wanted to pursue.   We walked back out front where there was a small patio table with two chairs sitting outside the open garage door. “I thought we could sit here since it’s such a nice day. Who knows how long it will last.” I was thrilled to be outside since it really was a perfect fall day.  I immediately felt comfortable-my Chicago family makes it a habit to sit out front with the garage door open, watching and talking to passersby.

If I Don’t Write, I Can’t Ask Them To

My English 101 students write profiles based off an interview.  For five years I read profile essays that were mostly about teachers in my building. The interviews had been scheduled at the last minute and could, in no way, answer the “so what” question beyond, “It’s a teacher I like who had time to talk to me.”  I knew my instruction was not resulting in students finding an idea they were passionate about, finding someone who exemplified that idea and creating a profile they cared about. I could not figure out what I was doing wrong. We read the chapter on profiles.  We looked at models. We listed the characteristics of a profile on an anchor chart. We wrote profiles of each other. We wrote a profile based on an interview transcript. Yet when it got to profile drafting time, they all sounded the same. What was I missing?

When I really started breaking the problem down, I remembered something from 24 years earlier, before I had even started teaching. In my methods class at the University of Idaho, I was charged with the role of Lady Macbeth for our in-class reading.  In the middle of my admittedly horrible performance, my professor said, “Sing it.”

The professor asked if someone else wanted to try it and one of my classmates jumped up and proceeded to cornball opera through the “Out, out” speech.  And she was really good. But I can’t fathom asking my students to do something I wouldn’t do myself. I lost sight of this until recently. If I don’t write, I can’t ask them to.  Well, I can ask them to, but I am not modeling what I am asking for.

I realized that I had not written a profile.  I wrote to model assignments with my students, but had I thought of an idea or issue that intrigued me, then found an individual who was representative of that idea, quite possibly a stranger I had never met before?  Did I pursue setting up an interview with that person? Coming up with questions? Actually following through? What to do if I had trouble getting the person I wanted to talk to? No. So I did it. And it wasn’t easy.

I emailed the Boise Weekly editor to ask how to contact Cope.  She gave me an email and I sent it to him, but he didn’t respond.  I tried again. This time I gave him a phone number to call me. And finally, he did.  This took two weeks. He didn’t understand why I wanted to talk to him, but when I told him over the phone, he agreed.  He invited me to his place which made me realize I should talk to my students about safety and involving their parents, just as I made sure my husband had the address and times where I was going.  All of these stories I shared with my students. I talked to them about how I went into the writing thinking I was interested in writing about the life of a writer, or advice he might have for young writers like my students, but after our interview I had a totally different focus–the power of creativity.  I had to give up my original idea because something better came about.

I showed the students my transcript.  I showed them my first draft. I asked for feedback.  I showed them comments from other students and from Bill himself, to whom I had sent a copy.  I showed them the revisions. They asked questions. They saw that I had done the same thing I was asking them to do and this changed everything.  I had a credibility I did not have before.

Students felt empowered to take risks which resulted in profiles about a homeless man in Boise, refugees who were trying to assimilate or help others, an FBI agent, a cancer survivor, a drug dealer, a high school drop-out, a transgender individual in transformation, a passionate business owner, a musician who is trying to make it in the business but working at the Guitar Center to pay the bills–and the only students who wrote about their teachers were the students who wanted to be teachers in the future.

The Importance of Modeling

Modeling is hard work, but it provides insight into the quality, relevance and difficulty of an assignment.  If I find a task tedious and am not doing any meaningful work, it’s a sure bet my students will feel the same.  I haven’t had to scrap any assignments, but I have made changes based on my own process. This is time consuming work. 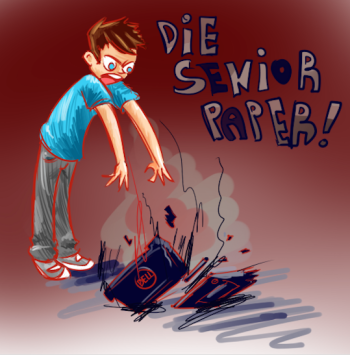 My AP Lit students were often frustrated with their senior paper because it’s an assignment with many layers that is really a synthesis of the work we’ve done all year, so I spent a good deal of my last Christmas vacation writing my own AP Senior Paper.  It’s a good model, but the most difficult part for me was picking a topic; since then I’ve considered how five of my other topics might be better models and I need to find the time to pursue them. It not only helped me see I have to do more work with helping my students pare down their ideas into something manageable, but I also need to find the time to write the other pieces that interest me.  In The Nine Rights of Every Writer, Vicki Spandel reminds us that students need to see writers engaged in the process and the struggle.  In “What We Learn When We Free Writers” Penny Kittle also talks about the difficulty of doing the writing with students, but that the product and the process bring rewards for both.

The most significant benefit to writing with my students is credibility.  When I wrote an argument about a program for teachers in our state that was being cut, I showed them my drafts.  I talked to them about how I had a colleague give me feedback. I showed them the revisions and the OpEd piece that was published in our local paper.  I was using writing to make real and authentic change.  (And the program did not get cut).

My conversation with Bill Cope not only produced a good model of writing, I got to know a really unique individual and spent an afternoon talking about writing and creativity.  My original piece was written to an audience of fellow teachers, focused on modeling in the classroom and in life, but with feedback from the editors, it has become more focused on trying to demonstrate the importance of writing with our students.  Just writing this blog will be another piece of writing I can share with my students, demonstrating the power of revision and being intentional about audience.

Paula Uriarte teaches at Capital High School in Boise, Idaho, and co-directs Professional Development for the Boise State Writing Project. She is starting her 27th year of teaching English classes including AP Literature and Composition, Creative Writing I-IV, and English 101.

2 thoughts on “Why Should They Do It if You Don’t? The Power of Sharing Writing With Students”

Join 650 other subscribers
Follow Writers Who Care on WordPress.com